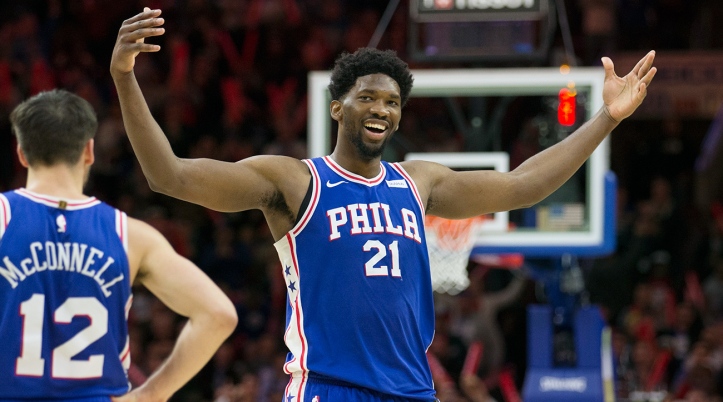 Welcome back to the NBA grind! It’s Thursday night and we have a six-game slate over on DraftKings tonight. There are a few games with some high totals, as the Wizards and Cavaliers matchup has a 221 total and the Clippers and Warriors matchup has a 232.5 total. Having some exposure to these two games will be key, but we will also need a few lower owned plays to propel our lineups up the GPP leaderboards.

With this in mind, I have focused on identifying my two favorite plays, regardless of price, at each position that can give us an edge in tournaments on tonight’s slate.

The Nets have been extra cautious with Russell’s playing time since his return from a knee injury, but Coach Atkinson had finally started to ramp up his workload before the All-Star break. In his last three games, Russell has averaged 27.7 minutes and an effective 34.5 DK points per game. Additionally, the Hornets are in the bottom half of the league in DK points allowed to shooting guards, ranking 18th overall. With Caris LeVert and Rondae Hollis-Jefferson both expected to sit out Thursday’s game, Russell should be in line to dominate the ball on offense. He has a 31.4% usage rate in 212.5 minutes with both players off the floor. At a discounted price tag, Russell is one of the top plays on the board.

Since the addition of Tobias Harris and Avery Bradley from the Pistons, along with Danilo Gallinari‘s return from injury, Lou Williams seems to be the forgotten man in DFS. Even with a few shakeups in the Clippers lineup, Williams has still performed well over the past five games, averaging 35.9 DK points a game. Despite this, Williams has seen his price tag decrease by $1,400 in this time span and he hasn’t seen 10%+ ownership in tournaments in almost three weeks. The Warriors are a relatively tough matchup, ranking fifth in defensive efficiency rating this season, but Williams put up 50 actual points in his last matchup against this team on his way to 65.0 DK points. In a game with a 232.5 total, Williams is a great target in tournaments.

With the Bulls set to give their young players extended run during the final two months of the season, Lauri Markkanen should see consistent minutes in the 30s the rest of the way. Over the past six games, Markkanen has averaged 14 points and an impressive 8.3 rebounds per game – good for an average of 29.3 DK points. The Sixers are most beatable at the power forward position, as Dario Saric ranks 75th out of 96 eligible PFs in DRPM. With Cristiano Felicio being inserted into the starting lineup alongside him, Markkanen should be tasked with more responsibility in the Bulls frontcourt on the offensive end.

With Aaron Gordon and Nicola Vucevic both set to return for the Magic in tonight’s game, Fournier should be an afterthought in DFS. His game has been a bit volatile recently, but Fournier has eclipsed 30 DK points in three of the past five games and he gets a solid matchup against the Knicks. The Knicks are ranked 19th in DK points allowed to SGs this season and are 18th in defensive efficiency rating. Both numbers indicate a mediocre matchup, but the Knicks’ defensive stats are sure to slip the rest of the way without Kristaps Porzingis. With Gordon and Vucevic likely to be on minutes limits in their first games back from injury, Fournier should have plenty of opportunities on the offensive end against a struggling Knicks team.

I’ve focused my picks in this article on contrarian mid-range plays, but I am going to anchor most of my lineups with Joel Embiid tonight. The Sixers are squaring off against the Bulls tonight and they announced that Cristiano Feliciowill enter the starting lineup over Robin Lopez. This is great news for Embiid on the offensive end of the floor. Of the 73 centers that are eligible to be ranked for the defensive real plus-minus statistic, Felicio ranks 73rd – dead last. Embiid is coming off a down game against the Knicks before the All-Star Break where he put up 28.5 DK points, but prior to that, he had put up an average 55.7 DK points in three games. He will be an elite option against the Bulls tonight.

On the other side of the Sixers-Bulls matchup is Felicio. The last two months of the Bulls season will be focused on developing their young players and Felicio will be one of the biggest beneficiaries. He will be inserted into the Bulls’ starting lineup against the Sixers on Thursday night and he is sitting at the $3,000 minimum on DraftKings. Obviously, we don’t have a great idea of what to expect, as Felicio doesn’t see a ton of minutes, but there have been two games in the past three weeks where he played 17.5 or more minutes. In those games, Felicio averaged 18.5 DK points. It’s not a huge takeaway but if we can project 22-24 minutes out of Felicio tonight, it would be safe to assume he could eclipse 20 DK points. At the minimum salary, Felicio will be a popular salary cap saver.